The Value of Pink 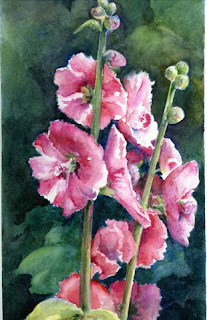 I started this painting based on a great little photo a while back, mostly as an exercise in using the color red -- which then became pink -- (and then just kept going with it because the other thing I need to work on is finishing what I start!)
Anyway, the other day I realized that I really needed to work on values and hues, and was struggling with getting a good range of values in PINK. Kind of like I've struggled with getting a good range of values with YELLOW. Thinking I had this pretty much finished, I scanned it in. Then I changed the scanner settings to gray scale, and... 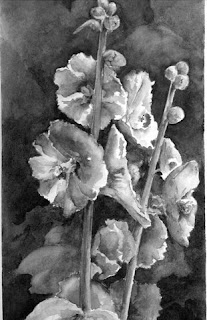 In grey-scale I could see that, while the values weren't quite as bad as I had originally thought, there were still some mistakes. Like the buds at the top left needed to have some lighter highlights, the open flower on the mid-left needed a better range to make it "turn" more ... and what in the world was that white speck??? Checking the color version -- there's a white speck there, too. Just a speck of unpainted white paper. ??? How did that happen? 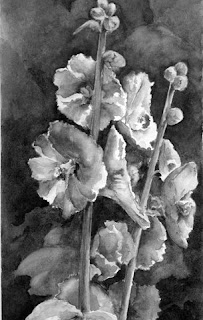 So, I went back and made some corrections. The buds at the top were lightened as much as they could be ... I was afraid of scrubbing a hole right into the paper! (Oh, how I love my scrubbers...)

(2) I need to work more on pink ... and yellow ... just playing with value scales so I have more confidence and can use them loosely and with more spontaneity. 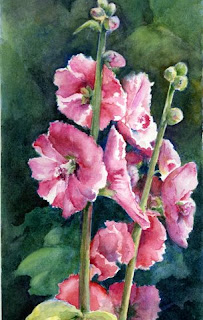 Finished as far as I'm concerned. What was supposed to be a very fast painting became a great lesson instead. And that's alright. More than alright -- that's a good thing.
Did I mention that when I went to the bookstore the other day and picked up a Watercolor Magic magazine there was an article featuring a couple of paintings of hollyhocks by Robert O'Brien? I'd already nearly finished this by that time, and wished I'd seen the article first! So let's add lesson #5 -- Study your subject a little more closely.... (Do go look at his awesome paintings!)
Posted by Linda at 4:23 PM

Geesh, this is gorgeous!!! I can't even see the values through all that beauty!!

I love all your words of wisdom! Thanks. Now if I only had a scanner. But I think Picasa has a grey scale. Have to look.

WOWOWOWOWOWZA!!! LINDA LINDA LINDA! THIS IS DROP DEAD AWESOME! Values, colors, variety, form, background -- OUTSTANDING, CARA, OUTSTANDING!!! AND your words -- TOO TOO GOOD -- and I too must do the same!! Thank you for such a lesson and a beauty for the eye!

I am amazed at what you can see when you put it in gray-scale,which makes me think of when I was in school and we had to do that value strip beginning with white and working to black AND a color wheel. I always said I was going to have those two suckers professionally framed and hung on my wall as art!

The Before...the After...both so stinkin' beautiful. You amaze me!

Hello from Lausanne, Switzerland! I managed to snag Rob's PC for a few minutes and read your fabulous post. I think we all need reminding of this "valuable" lesson. You make it sound so simple,so why not do a value sketch?
Love the painting, linda!

The background on this painting is gorgeous, Linda. Watercolor backgrounds are difficult for me, so that's usually the first thing I notice. I love the colors you've used. (And thanks for the tips on the focal point. I appreciate your suggestions.)

The values are also impressive.

Dear Linda,
I did not think too much about value until now. I am still at the stage of discovery and hesitant to put science into art. Your "value" study is a big eye-opener. Thank you very much for sharing. Your work is beautiful!

Let's add the value of sharing to your list....it is a good reminder to all that great art doesn't just happen (well it can I guess). It takes practice and planning and preparation, etc....thanks for reminding me of those things I all too often dismiss...
I could see the improvement in the second scan of your hollyhock...it's beautiful!

What a great lesson - thanks for sharing. Hollyhocks are one of my favorite flowers and yours are just gorgeous!!