Well, I'm still under the weather, but feeling better than I have for the past few days. Around noon today I started getting a bit antsy. D, who knows me best and could tell I was really and truly bored, drove me to Jerry's to pick up a jar of Gum Arabic and a couple of tubes of paint (sweet, isn't he?) and then stopped by Stir Fry Cafe, so he could run in and pick us up some spicy Thai soup and egg rolls. That short outing was enough for me, and I had to rest when we got home. But not for long, and I got back up long enough to watch the end of the Indianapolis game. (We Tennesseans love Indianapolis because they have Peyton Manning, our former UT quarterback. We have a really hard time with team loyalties when the Colts play the Titans.) 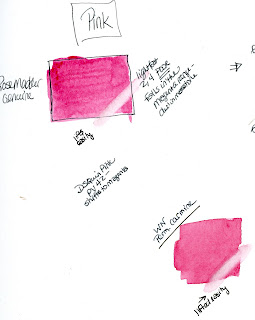 Playing with the paint swatches, I see that my WN Permanent Carmine (in a tint, not in masstone) DID look VERY close to Rose Madder Genuine. Actually, closer than any other color I've tried. Well, well, well. Now to experiment some with gum arabic. I think I need to also do a set of swatches on the actual watercolor paper that I most commonly use, too (Arches 300#HP).
(You can see in this picture how the Rose Madder is a little streaky -- it's that wonderful honey-like texture. It's also hard to tell from a scan and on a computer monitor exactly what these colors look like. To me, the monitor shifts them both to a bit bluer tint than I see in real life.)

And, I don't know about you guys, but when I'm not feeling well, I fret about the strangest things as I'm drifting in and out of sleep. Like at about 4:30 this morning I realized I'd never wondered WHY Rhode Island is called Rhode ISLAND. What -- I'd never thought about it before -- why??? And, where did thought come from???? Anyway, a web search this afternoon (yes, it plagued me all day) revealed that the real name of the state is Rhode Island and Providence Plantations. Did you Rhode Islanders know that?

You know how it goes with you're just casually surfing the web. Sometimes you get going in directions you never planned. It's my favorite part of surfing. Today I found this handy tip, just in case the power ever goes out for a long period of time and you really need to recharge your iPod:
How to Charge an iPod Using Electrolytes (e.g., Gatorade) and an Onion

Gee you are posting faster than I am writing. I am enjoying these little findings of yours. Maybe you should take some more days off.

Happy you are feeling better.

Well, I must admit I never wondered why Rhode Island is called Rhode Island but I will confess I have sometimes wandered far off the track of what I set out to see when surfing the 'net!

Glad you felt well enough to get out for a little while at least.

I've been enjoying the posts on your blog and now feel like doing some colour exercises too. :D I've added your blog to my list too. Get well soon!