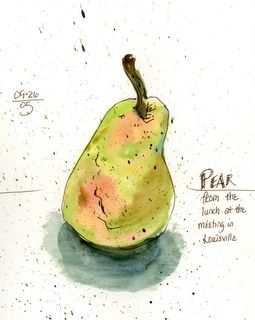 Our friends lost their 18 year old daughter in an automobile accident early this morning. Tonight I tried to sit and draw this pear (which found its way from a box lunch into my pocket at a business meeting this last week) but just couldn't get excited about it. I hurried through and sat with a deck of cards playing game after game of solitaire instead.

I just want to say, love your children well, folks. You never know what tomorrow may bring. 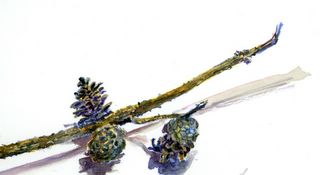 Now that September is here, and things are beginning to turn brown AND now that I've banished browns from my watercolor palette, I find I have a problem ... HOW DO YOU MAKE BROWN??? 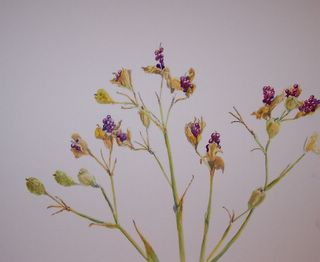 Blackberry lily, from my sister's yard. NOW I know how it got it's name! 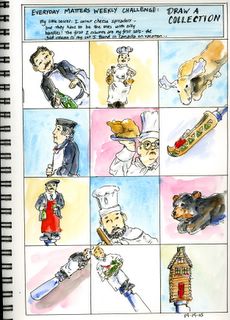 This week's challenge for the Everyday Matters group is to draw a collection.

I have a silly collection of cheese spreaders (with the RULE that they have to have a goofy, tacky figure on the handle) that I keep hidden away ... it was fun to do a silly drawing to match! 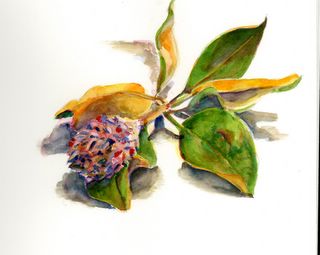 Magnolia seed pod -- blown down by the recent winds, from the tree in the front yard. Inspired by Laura, although I could never do as well as she does! The details of the thing are driving me crazy. ANY ideas to "fix it up" would be very welcome! 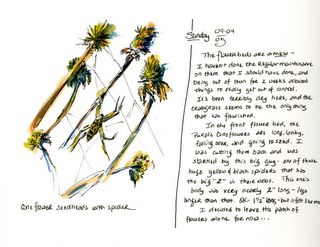 This is not the most successful of paintings, but it IS a very important one to me. I'm getting over my fear of drawing in front of people, or of even being SEEN drawing ... I actually pulled a seat up to these flowers in the front yard, right at the end of the driveway, right where everyone could see me it they wanted... and drew.

Next thing you know I'll be sitting at coffee shops, drawing total strangers! :-)

A couple more scraps from my sketchbook, and I'm finished talking about this vacation! I ended up filling nearly half a book, which is amazing to me because it used to take months to get halfway through a sketchbook! 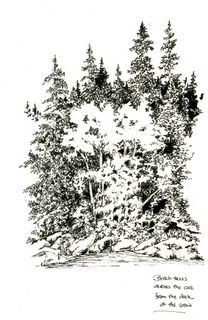 Birch trees against the dark pines. I just can't figure out how to do the detail of the birches without losing the look of how they stood out, so it will just have to remain as is. 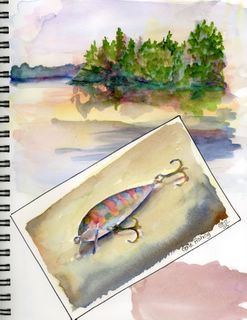 The fishing lure was painted before the trip. The WC of the point was started our first morning in Canada, but I didn't finish the last wash of darks until after we got back. I like this "sloppy" watercolor business!

On our last day in camp we had some dark storm clouds pass through. As they blew out, the sun was beginning to set, and that SPECIAL light (you know the kind I mean - all gold against the dark) hit the tops of the trees. I snapped a couple of photos, thinking it would make a good pastel landscape (which I haven't done in years, by the way.) 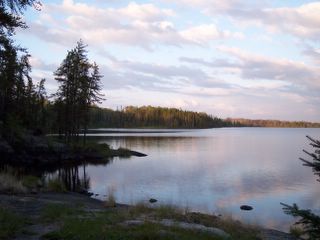 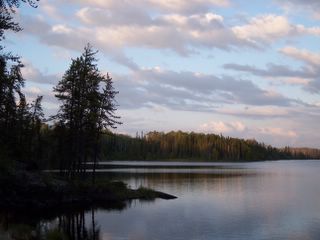 Now I'm having difficulty seeing how it should be cropped for the best composition. Anyone with any ideas?

More from the Canada trip:
Anybody who's read this blog knows I can't resist a good garden, and the wildflowers in the north woods in late August was gardening at its finest. In the evenings when everyone else in our group read around the big table, I tended to sit with my sketchbook, squinting in the gaslight at some bit of a plant that I'd picked up that day. 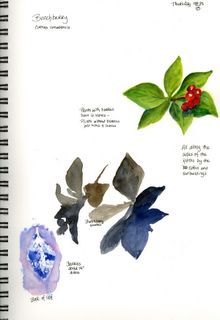 Bunchberries in full bloom lined all the paths and grew in patches throughout the woods ... at least the part of the woods that were "walkable." I was so taken with these little guys, and wonder how well they would grow in a southern garden. They'd be a nice addition to my shady wildflower border! 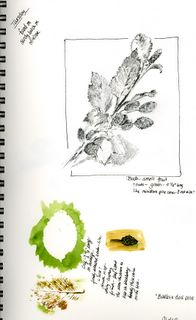 One day, on a little sandy spot where we'd beached the boat for a bit, we found this little shrub. I could not figure out what it was! It was covered with what looked like tiny green pine cones, but wasn't any kind of conifer that I'd ever seen. I took my sketchbook and a leaf (that was stuck onto a piece of strapping tape and then covered with saran wrap ... I need to come up with a better way for samples!)... to the Voyageurs National Park office when we got back to Minnesota. The ranger there was REALLY helpful in identifying it as an alder bush. Of course, she knew immediately what it was ... and she said she grew up calling them "Barbie Doll Pine Cones." She also helped me identify some other wildflowers that I didn't know, even coming outside with me to track down a plant or two to look at, digging through bookshelves, and calling co-workers over for further consultation. Big smiles to the Voyageurs staff last Sunday!!! :-) 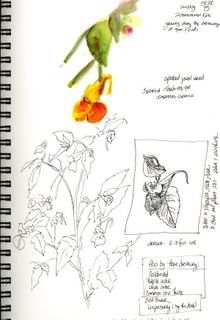 Wildflowers were also abundant in International Falls. This spotted jewel weed, or spotted touch-me-not grew along the driveway of the house there. Mom said she always called it "wild snapdragon" because the mature seed heads explode when you squeeze them. They were graceful and delicate and their coloring was exquisite ... of course, by the end of the week I was just too tired to do a good job with the details in the painting!