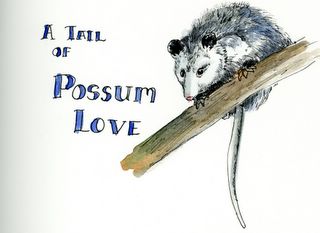 I imagine it was several years ago that the first possum crept into the crawl space under our house. Generation after generation has probably used our crawl space as a safe hiding spot, but it wasn't until this year that somebody decided to nest in there. Not only did the ole' girl decide to nest under our house, she decided to rip into the heat/air ductwork, climb into the center of it all, build a nest, and proceed to have a litter of babies. Possums are generally quiet folks, so we didn't realize they were under there, until one of the young ones (nearly full grown -- a teenager, I guess) had the poor manners to pass away. IN the ductwork. I repeat ... IN the ductwork, which created a most pungent notification of their presence. Sheesh.

We were fortunate that it was unseasonably cool that first weekend. We were able to cover the vents downstairs where the smell was worst, and open the windows. We got under the house, and during our poking around heard something large moving through the ductwork. Now, not knowing exactly what was causing the, um, aroma, much less what to do about it, or what to do about the invader, whatever it was, we called in several experts. Nobody believed me when I told them there were animals INSIDE the ductwork. Nobody. It didn't matter how explicit I was, they all assumed I was exagerating and the animals (and carcass) was just under the house. And every single expert we called out was shocked when they came by for a look and discovered that I wasn't kidding.

Anyway, very long story short, we ended up having to hire a varmint exterminator to come out and try to trap the animals and get rid of the "d.o.a. possum" (that's what it said on the invoice), and then get a heating/cooling company to come in and REPLACE the ductwork. Possums are not kind to man made structures, by the way; they had torn it up all through the downstairs system. What they hadn't torn up they had lived in, and possum babies are like human babies when it comes to the matter of continence. We were VERY fortunate that our insurance company covered possum damage, since the total cost of the job to date has been ... hold onto your seats ... $5900.00.

What does this have to do with anything? Well, we live in the deep south. There have been days when the temperature has been in the 90's, and the humidity ALSO in the 90's with barely a swish of a breeze. We were completely without air conditioning for 3 1/2 weeks. I did NO artwork during that time! Paper stuck to whatever surface you laid it against. My skin stuck to whatever surface I laid IT against. Misery. So, you see, the tale of possum love is my reason (or excuse, if you so choose) to be SO behind on the EDM challenges!

A couple of interesting possum facts:
Dead possums Smell Terrible.
Live possums Don't Smell That Great either (kind of like a mix of musk oil, old garbage and wet dog).
The average life expectancy of a possum is one year. (according to a friend of mine)
The average size of a possum litter is thirteen. (according to the wildlife extermination expert)
I used to think possums were kind of cute.
Now I don't.

By the way ... does ANYBODY ever actually say "Oppossum"??? I don't believe I've heard anyone anywhere call them anything but "Possums". 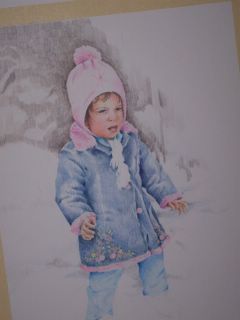 Little Miss "A" in colored pencil - work in progress (approx 16" x 11"?). I had a hard time getting this to photograph clearly, so it is really very blurry. Hopefully, this gets the general idea across. Her skin is probably 20 plus layers of colored pencil, and her coat is already that much and more in some places. Still a whole lot of work to do (notice that I haven't started her scarf or shoes!) I think I'm going to keep the background sketchy and vague, to keep the blurry feel of a snowfall ... we'll see! 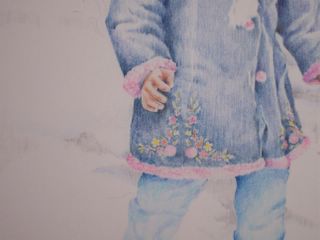 Closeup of her hand and coat - a lot of work still to do just on the embroidery! Colored pencil is very slow work (for me) although I find it to be the most relaxing of all the artwork I do. I may have it finished in time to give it to her as a wedding present or something :-D