Saturday is All Right With Me 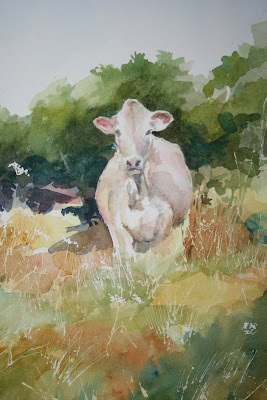 So, before leaving for watercolor class this morning I worked on Miss Vanilla Cupcake a bit. I had her really just perfect -- then accidentally overworked a bit. That's okay -- I'll scrub out a bit and get her fixed. Her right eye (viewer's left) needs the lid fixed, too. (A few of us could say the same thing about ourselves, I guess...)

Then, in watercolor class I worked from this photo I took earlier this year in one of those little beach towns on the Florida gulf coast: (If you would like to join me in painting from this photo -- come on along. The more the merrier! I'll put it up on Flickr, too.) 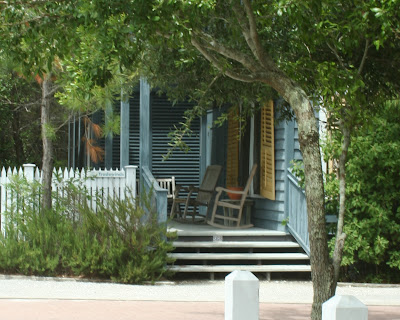 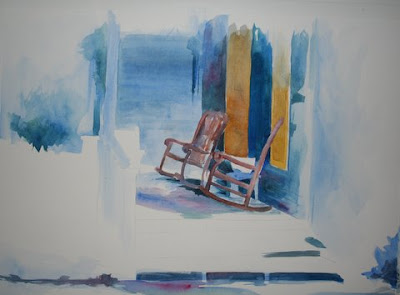 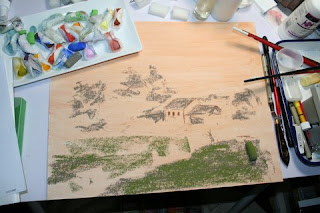 And then, this evening, I couldn't stand it anymore. I pulled a photo from Wet Canvas and started playing with my new pastels. Here's the start... 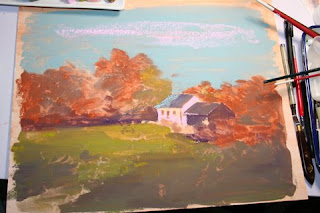 And the midway point... 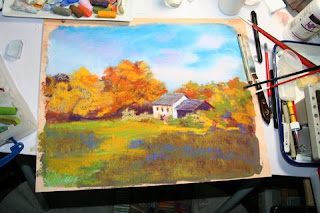 And where I'm ending up tonight. I think I've gone a little bit crazy with the golds and oranges here... they're just so darned PRETTY.


I'm using multi-media board (waterproof) primed with acrylic matte medium mixed with grit and tinted with acrylic. The nice thing about this surface is that if I decide I've really messed up, I can just run the pastel under the faucet and wash it away. I can also stop rinsing it off at a midway point, where there's kind of a ghost image left if I have the basics right and just want to do the colors differently. Kind of nice for someone who messes up as much as I do... ;-)

And I have to say -- maybe I was influenced to use all that orange after I took a break to watch the last quarter and FOUR overtime periods of the UT / UK game. GO VOLS!
Posted by Linda at 7:44 PM

Linda -- OH HOW I LOVE your COW! Sweet and looking like she wants to make you a friend .. gorgeous job! And that house in pastels -- just awesome -- colors so bright -- LOVE IT! And that porch scene!! YOWEE .. nothing like complexity .. without a drawing!!!! LOL WOW!! Can't wait to see how this turns out! I am IMPRESSED, my friend .. truly! incredible work!

Wow, you are on a roll!!!! You made me dizzy with all the art here. All wonderful and I will be watching the rocking chairs and Ms Cupcake :) Good to see you well and active but did you have to give me your cold?

It's always fun to see you working!!!! The cow has such character and the porch looks like it's off to a good start! Can't wait to see the finished paintings!!!

I agree with Teri----you ARE on a roll! And when you get on a roll, wonderful things happen! Everything looks great, Linda---can't wait to see more of your pastels. You seem to love this medium!

I have looked at this cow at least 4 times over the past 2 days...always trying to find a way to respond to it. It captivates me for a number of reasons, but primarily for its utter (no pun intended) simplicity, not only in cotent but in the use of color and brushstrokes.

I enjoy seeing your work.

Your pastels are gorgeous (both the individual crayons and the painting you made with them. Thanks for explaining about the support you're using. How cool that you can just wash it off! I love the way pastels look but can't stand the dust.

I'm looking forward to a day like yours. It has been awhile.
All your work is lovely and wonderful.
Loving those beautiful pastel paintings!