Just Waiting On A Friend 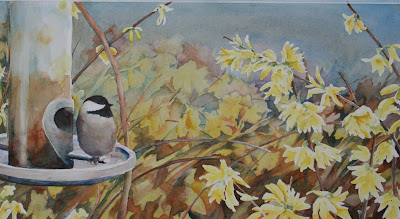 One evening, as I was sitting down to dinner, this little chickadee came to the feeder outside the window and perched. He ate only a few bites, and then just sat on the perch, looking around for well over twenty minutes. It reminded me of the Rolling Stones song ... "I'm not waiting on a lady.... I'm just waiting on a friend..."

Anyway, I'm trying to see if this one is finished. Getting the foreground yellow flowers to stand out has been tricky -- too much "fiddling" and they blend into the background. What do you guys think? What and where would it benefit from a dab more work?

My original idea for this, by the way, was to have a very solid gradiated wash background. Yep, solid -- I wanted to empty space to emphasize the feeling of waiting. And I planned on a very neutral and light space, too! Unfortunately, I messed up the wash (experimenting with a pour -- sigh) and then created some SHAPES in the background when I tried to fix it. I was going to abandon the whole thing, but my WC instructor convinced me to carry on along this new direction. (Truthfully, I think she PREFERS this direction to the one I was planning! :-D

OTHER exciting news of the day ...

I got to spend the morning helping to judge and elementary & middle school art show. Our very own Diahn was the Art Fair Chair Person (hereafter known as the AFCP) and she did a fantastic job of organizing and pulling off what had to be a really really tough job. I got to help judge the older grades, so I wasn't forced to avoid bias for Derek's and Josh's work, which was great -- be sure to go see it!

I LEARNED so much from helping with this show! I'm entering my own first juried show in a couple of weeks, and now I know a little tiny bit about what judges look for. I know that it is tiring work. I know that it can be hard. I know that you have to do something that really stands out in the end! Hmmmm... means I need to really think about what I'm entering, doesn't it! 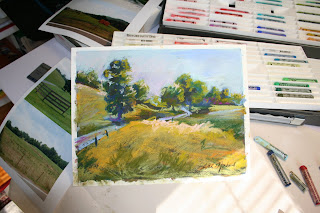 I've just spent the past two days at a wonderful pastel workshop given by Paul DeMarrais -- a FANTASTIC pastel artist, who truly paints like one of the old French Impressionists. What fun. He stresses value value value -- you can use any color as long as it is the correct value. With pastels he was able to demonstrate value lessons and principles easily, much more quickly and with less fuss than with paint. We learned to make our own surface, using aluminum oxide and acrylic medium on multimedia art board -- and this surface is amazing. It holds an incredible amount of pastel and makes working fun. (This little piece, still in progress and done this afternoon after I got home, is on Colorfix -- which is a nice surface, but doesn't measure up to what we were working on with Paul.)
Best of all -- Paul loves what he is doing -- the workshop was pure FUN and felt like playtime. 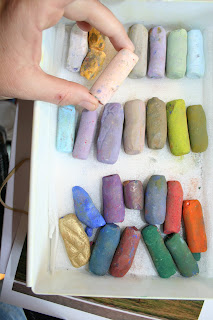 He makes his own pastels (which he sells) and we were able to go through and get a set if we wanted. They are big and bulky and soft and lay down like buttah .... even Senneliers feel hard next to them. Of course I had to get a set. I'm going to save them for when I get some big sheets of paper made up, though, so I can really lay 'em down!
I've walked away from this workshop inspired, and able to see a potential painting everywhere I turn. If you ever get the chance to meet Paul or see any of his work, be sure to take advantage of the opportunity -- you won't regret it!

Now, I have to take care of my assignment and get my pastels out of their nice little compartments, organize them by value, and let 'em get a little bit messy. Pastels just aren't happy being kept cooped up like that ... 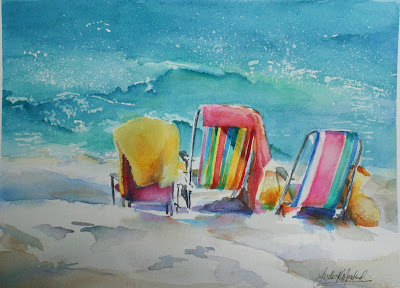 From a snapshot taken on our quick trip to Destin to visit the Dear Daughter a couple of months ago. The weather was warm and beautifully sunny, and we got to spend about an hour on the beach. Oh, to be there now! The cold spell that came through our area two days ago (and is expected to last for another couple of days) has destroyed the blossoms on the dogwoods and azaleas, which were both reaching a fantastic peak. Crepe myrtle bushes had begun to put out leaves, which now look like wilted salad that has been slung into the branches. Most of the trees that had begun to leaf out look okay -- I think it was just the very tenderest leaves that were so badly hurt.

Thankfully, I had taken a few photos of the dogwoods the day before the weather turned so cold... 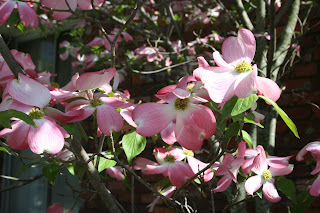 The pink dogwood flowers were intense this year, not at all pale and washed out. Until now, at least.

The white ones, of course, were at that particular stage of perfection that makes EVERYONE break out their cameras and start taking photos! 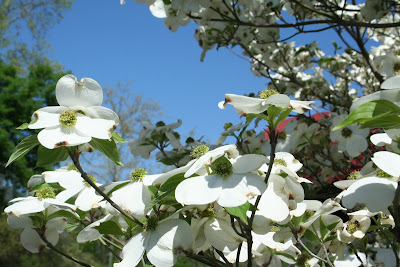 **Now that I see the watercolor painting on screen, I see that I need to darken some areas in the water, at the base of the central wave. The yellow towel probably needs to have a nice highlight scrubbed out, too. Originally, the far left beach chair was one of those short, "down on the ground" chairs, and was navy blue (based on the photo). I painted it that way, and then realized that the smaller chair just looked like I drew it wrong. I was all for tossing the painting and starting over, but my WC instructor insisted that I scrub out waves and just make the chair larger -- changing the color from dark blue to pink was my idea -- the towel changed from a dull red to yellow. Really, it's amazing what you can do with the right paper. This is just a small painting, and I think I'm going to do it, or something like it, again larger.
By the way, right now I'm working on this, which is not turning out like I'd originally envisioned -- not at all! It may be a do-over, too.
Posted by Linda at 5:18 PM 24 comments: 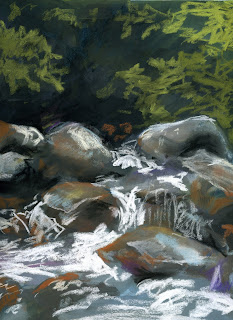 Spring has arrived in Tennessee in a great rush!

I've also been rushing along -- busy busy busy at work the past couple of weeks, but still painting (just nothing ready to really show.)

It is time for a self report on how I'm doing with my New Year's resolutions, though. Do you realize that the first quarter of the year is now gone?


(2) I will be working more in pastels.
See small creek study above. See Item #3 below, too! Woo hoo! And for all you shoppers out there -- I bought some new pastels at the amazing April Blowout Sale at Jerry's. Yep. Sometimes it really IS all about the art supplies.


(3) I'd like to take an art workshop sometime this year ... I don't know where or in what...
Friday (yes, THIS week!) afternoon I attend a workshop by Jon Houglam on portrait and figure drawing. AND ... drum roll please ... the weekend of the 20th and 21st of April, a two-day pastel workshop with Paul deMarrais ... an artist whose work I've watched for several years now. I'm VERY excited!

(4) I WILL be hanging art for sale at the gallery at the art center. Period. I'm running out of room here...
I'm planning on entering a couple of paintings into a juried show at the Art Center in May -- we'll see how that one goes! There will also be a student show in July. I need to work on something else, too ... I guess this one is still an EARLY work in progress!

EXTRA -- GALAPAGOS in 5 years --
I've started to teach myself Spanish. Well, it's a start!


How are YOUR plans for the year coming along? I'd love to hear about them!