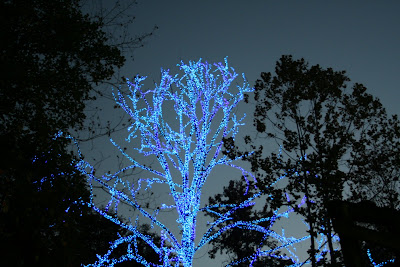 Whew! I barely made it home tonight in time to keep up with the daily blogging challenge. This morning started early -- to work for a bit; stop by the bank; make it to art class thirty minutes late; leave art class an hour and a half early; rush home to change clothes, meet my sister, and drive west to the gallery open house; hop back into the car and drive east to Pigeon Forge where we helped our friend Marcia at her jewelry booth in Dollywood. She has been selling her beautiful jewelry during the crafter's fair there for the month of October. Every day (except Thursdays) for four weeks she has been driving to Pigeon Forge, working for 9 to 11 hours and then driving the hour back home. As my brother-in-law so eloquently said, "No, it's not really a long drive, but it IS a long commute!" Today was the last day of the fair, and we went to help out with sales and then to pack and load everything.

It was a bittersweet day for Marcia -- the work is difficult and the hours are long, but the fresh air is great and the park staff and visitors are always a lot of fun to talk to. The park will be closing for a few days - maybe a week? -- while they finish getting ready for the Christmas season. Marcia's booth was right beside the water wheel and right under "the big blue tree" that everybody who has ever been to Dollywood for the Christmas lights knows. They already had the lights on it and they were working tonight, so we got a preview. I always thought they surely left the lights on the tree year round, but found out that they don't -- they actually take them down and clean each little bulb, and then re-do the tree the following October. The sad rumour is that the tree may be dying, and no one is sure if it will be there next year. That may not be true, but it does appear to be an old, old tree. Pretty, isn't it?

I guess the discussion about concept will have to wait until tomorrow! I only have a general concept of exhaustion tonight! :-D

You know, you really should try to keep busy. All that idle time will do things to your brain. :D How was the gallery open house??

Ah, such a devoted NaBloWriMo-er!! And your post has substance! I keep hoping to improve my own posts!

Geez, I just realized I have been calling it NaBloWriMo for no telling how long and it is really NaBloPoMo! Good grief. Well, you know what I meant! Now I've got to go check my own blog and see how many times I wrote it wrong.

Di- the open house was great! With the re-model I can see what a great little gallery it really is. I'll have to tell you more about it.
Annie -- That's HILARIOUS! Your subconscious is telling you that you really need to be doing NaNoWriMo, you know...

Wow, I have not been to Dollywood and this tree would surely make it worth while.

Busy? I think your middle name is busy and I applaud you for keeping your daily posts challenge.

A little busy are we? That's a pretty picture, make a lovely watercolor.