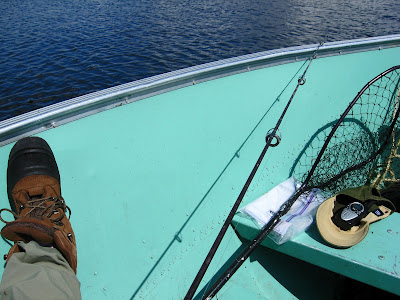 Not only a shadow shot, but you also get to see my really fashionable shoes ... 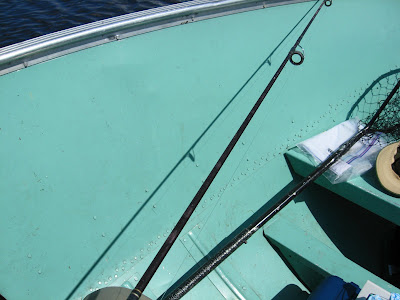 Okay, so I knew you wouldn't really want to see my shoes, so here's one were I zoomed in a bit better. Go visit Hey Harriet! for more sunny shadow shots. 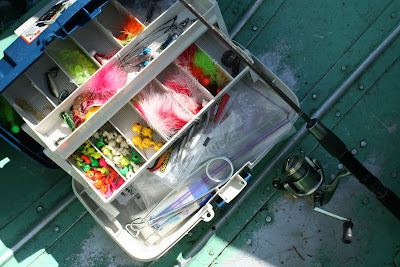 Tools of the trade. Nice, huh? Who knew that a tackle box could be so colorful? 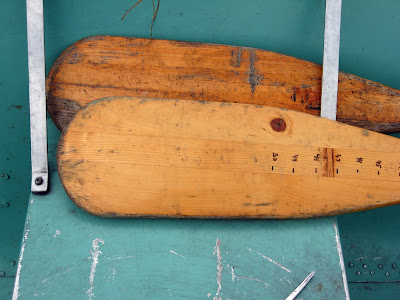 Even the oars in the boat were useful tools for fishing... 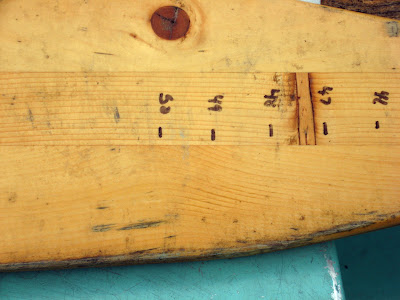 Needing something that measures fish up to 50 inches is more practical than optimistic if you're fishing for Northern Pike on McVicar Lake.

Hmmm... not that I caught one that big, but it does happen! I don't actually seek those big things out, preferring to go for walleye. (Yum!)

To be perfectly truthful, once dinner was reeled in, I was more interested in catching some photos and enjoying the scenery. I guess, for me, fishing is just a good excuse to be outside looking around... 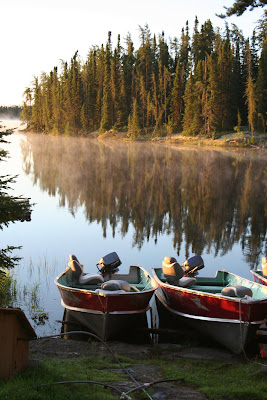 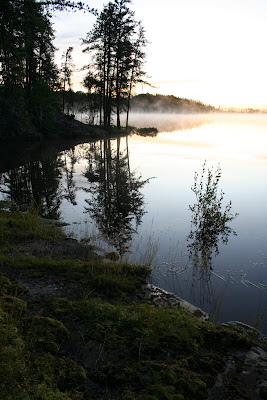 Have a good week, you guys! 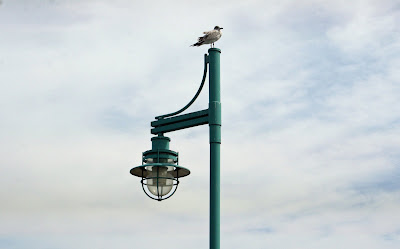 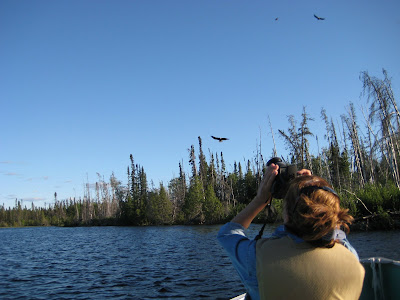 Well, I've been off fishing and MORE!

Doug and I drove from Knoxville, Tennessee up to International Falls, Minnesota, where we met up with my parents, their friends, and my sister. We all piled into two cars with our outdoor gear and sleeping bags and some food and headed up into northern Ontario, to Ear Falls, where we stayed the night at Gawley's Little Beaver Lodge. From there, we were flown in a teeny tiny little plane that ended up landing on a remote lake* -- leaving us to fend for ourselves for a week in a lonely cabin in the wilderness.** PERFECTION!

While we were there I did a little bit of sketching and painting, but not as much as I'd hoped. We had quite a bit of rain (the blue skies in the photo above were infrequent and intermittent, except for a couple of days) and small boats on windy lakes just aren't the best environment for comfortable (or accurate) drawing. Still -- I took LOADS of photos (in the thousands) and have many months of inspiration for painting. I have some sketchy "stuff" started in my sketchbook, and I'm going to sit down and finish things up to show you guys as I review my vacation and wish I was still there, Up North.

Can I just say, folks -- if you love the outdoors and if you even just kind of like to fish, THIS is the vacation to take, at least once in your life. Seriously. You don't have to know how to fish to catch them, just throw in a hook and wait a few minutes. There are no TV's, radios, telephones, NOTHING. Peace and quiet and wind and eagles and stars like you wouldn't believe -- and if you're lucky, Northern Lights and caribou swimming across the lake.. The Gawleys run a great operation, and I can't recommend them highly enough.

After we returned to International Falls, Doug and I headed out the very next day and took a winding back road tour home, including a nice side trip along the northern shore of Lake Superior. We had the best time traveling both ways, including doing our own version of Diners, Drive-ins, and Dives ... what a fun way to travel! I feel so grateful to live in such a beautiful country, and to have had this opportunity to see it up close.

So stay tuned. It is taking me a while to sort things out -- I still haven't found my paintbrushes, but there is still a bag or two to be unpacked. But very soon -- I'm ITCHING to paint!

*Woman River Fly-In -- Lake McVicar
**sounds very dramatic, doesn't it! :-D
*** OH! and very special thanks to my sis for taking the picture of me taking pictures of eagles
:-)

P.S. does anybody know how I can map our route and embed it into a post? I tried on Google Earth and Google Maps, and can't get what I was hoping for. Sigh. I may just have to take a marker and draw the lines on a map, and then scanning it in! 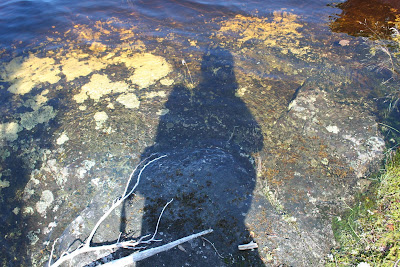 A shadow shot from somewhere other than where I normally am.* Please note that I am a bit plump, but not as plump as I appear in this shadow. I'm actually wearing about 3 layers of long clothing (in August!?!) and a life jacket.

So, if you haven't guessed yet, I've ventured off for a bit and am on my way home now. More details later on!

And a note to any of you shadow shooters who may be in the Duluth area -- I missed a great shadow shot from 535 south at about 7:30 in the evening where a gigantic chain casts the most lovely shadow onto the side of a ship in dock -- (the ship is the American something or other ... can't believe that I can't remember!)
For shadow shots that WEREN'T missed, go visit Hey, Harriet!

(Shhh, all you grammar teachers out there! I know that isn't the way to end the sentence!) 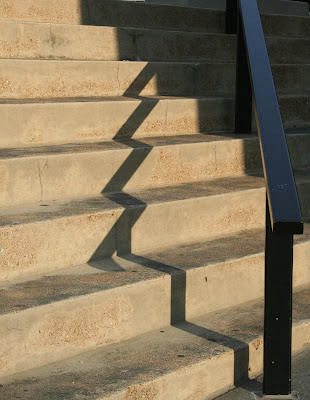 Going up? Going down? Zig zag shadows make your head go round.

Fabulous shadows over at Hey Harriet! this week for Shadow Shot Sunday. Hope it is sunny and bright where you are! 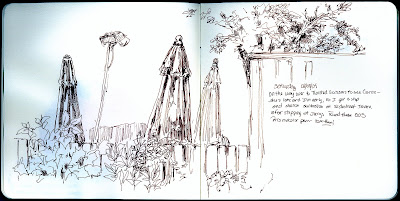 I got a 15 minute break this afternoon between errands, and stopped to try out a new drawing pen by Prismacolor (heads up, people -- THEY make a 0.05 in sepia!) in the Handbook Journal. I parked in an attorney's empty parking lot, directly under the Do Not Park Here Unless You Are Visiting This Attorney sign and sketched the patio of Sidestreet Tavern over the top of the fence. (Shown darkened here, just to view a bit better.) For some reason I find sunbrellas compelling ... maybe I need to do an actual PAINTING of them. Novel idea.

Okay, back on track ... so then I took it home and added watercolor washes ...

... okay. This particular brand of sketchbook really ISN'T for me -- for watercolor at least. Big yuk on the colors and the wimpy values I get with this paper! I just work too wet and with too many glazes.*

Later this afternoon I picked up a couple of pieces of #140 Arches hot pressed and one piece of #90 hot pressed (just for variety, you know) and am going to be sewing something up. Quickly. Toot-sweet, don't you know. I have an outing planned ...
:-)

* I ended up trying to work in some darks with my handy-dandy carbon pencils... WAY overworked.

**Uh, another note. Why in the world did I sketch in the patio light on a pole? Sigh. I knew as soon as I did it that I'd made a mistake. If I was a clever Photoshop-er I would have taken it out of the scan and you would never have known.

A mandarin orange, one of two that I picked up yesterday at the Fresh Market. Either that, or a lumpy orange circle. You choose.

I'm busy searching for the perfect sketchbook for an outing and thought I'd go ahead and give the Handbook Journal (that so many of you love) a try. Not what I'm looking for, unfortunately. The paper just doesn't stand up to the abuse I offer, although I love the 5 1/2" square size. Hmmmm... just the size to use if I decide to bind my own ....

I really like all that nice space out to the side of the orange (or lumpy circle, whichever you chose.) It looks like a nice place to jot down all those complex physics equations that rattle around in my brain. Or grocery lists. Or describe the weather. Whatever -- Funny thing is, this book makes me want to use it to sketch people -- it feels friendly, and not precious, precious. Just not right for my outing, I don't think.

For a beautiful INSPIRATIONAL sketchbook video, go visit Cathy Johnson's web site and find her youtube videos of her April/May sketchbook -- these are really wonderful, and I'm so thankful that Kate shared them with us! 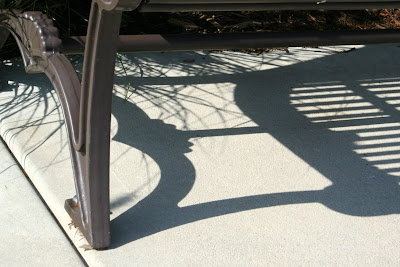 Shadows really are different in different parts of the world. This was taken in Wichita, Kansas -- and the shadows there are incredibly sharp compared to what we see here in hazy east Tennessee, which must still be hazy even when we poor locals think the sun is out full force!

Go visit the group at Hey Harriet! to see how other shadows all over the world looked this week!

A (LONG) SIDE NOTE:
Sometime in early June I looked at how busy the summer was going to be and gave myself permission to skip sketching when I was pressed and to skip Saturday morning painting if I needed to -- it seemed like the only way to maintain balance. Unfortunately, the undisciplined kid in me took that to heart, and therefore I have barely done any sketching or painting in two months. NOT what I thought would have happened! So the sketchbook is back out, and I'm adding the rule of no matter how busy I am, I at least sketch my coffee cup. The Fifteen Minute Rule is what I call it -- I can at least find 15 minutes!

As to my unexplained absence from the world of blogging -- it has been a crazy busy fun summer for me so far, folks. We drove to Wichita in mid July to celebrate my husband's parents' fiftieth wedding anniversary. As a surprise treat for them, the invitation included a request that people send in their photos and stories about Doc and Mary, and I got to compile them all into a scrapbook. It has been a long time since I did anything "scrapbook-ish" and turned out to be a rather time consuming project, taking up most of my art time for over a month. I really felt privileged, though, to be the one to first read some of the wonderful stories about how my in-laws had touched so many lives.

Other fun "stuff" that has gone on this summer:
Work madness ensued and then resolved (yay! -- but isn't that always the case?);
An absolutely WONDERFUL week-long visit from my niece, starting and ending with a few days of my sister and other niece thrown into the mix -- what a BLAST!;
Time spent on the boat enjoying the sunny weather (when we got it);
The house remodel continues, with the kitchen and downstairs bath being halfway complete (I've put them on hold temporarily because I have to change planned colors now that I see the new counter tops in the room -- sheesh -- I'd never make it as an interior designer!);
There's more that I've probably left out and EVEN MORE fun stuff is planned that will take me away from the computer here and there over the next month.

But even if I'm away from the computer -- I WILL BE SKETCHING AND PAINTING!