On Being a Painter

I don't mean an artist. I mean a painter. As in a painter of walls.

That's what I've been doing for the past few weeks. Well, when I've not been working like a big dog or travelling to Texas during a heat wave. Other than THOSE things, I've been working on painting the dining room.

When we first bought this house, about 15 years ago, the interior was ... it was ... well, it was different. The house was built in the 70's and we were the third set of owners. The first set had left things much as they were in the early seventies, including fixtures and wallpaper. The second set of owners had stripped some of the wallpaper and replaced it with Laura Ashley prints, mostly in shades of blue and peach, and then painted the remaining GRASSCLOTH wallpaper a dark shade of Wedgwood blue. Different. Maybe that's why we got the house so cheap.

Fast forward two years or so. In the kitchen we have stripped off the gigantic head splitting print of strawberries and peaches and magnolia blossoms all growing off of the same curling blue vine and painted the walls a lovely non-busy white. (My FAVORITE white -- Benjamin Moore's Atrium White -- LOVELY). In the bathroom we have stripped off something and uncovered some holes in the wallboard that were PAPERED over. Jeez. We have re-painted bedrooms that were a nice little girl shade of hot pink and mauve to a calm light purple and beige, respectively. We've done several things. The entire time that we've done all of this, I have been scraping and peeling and steaming and pulling off lots of blue painted grasscloth. Lots. More than you can imagine. My neck is a mess, my shoulders are shot, I have no life other than work followed by hours of scraping off quarter sized pieces of wallpaper every single night.
Every. Single. Night.

You will understand why I quit for a while. I was tired. I needed a break from fixing things. I swore, however, that once I was rested, my next project would be the horrible dining room, papered in Laura Ashley (of course) stripes of pink and blue and icky gold and white. It looked like an ice-cream parlor on steroids. It was HORRIBLE.

I never got used to it, but I never actually got around to doing it either. For about 13 years, I muttered nasty things about Laura Ashley and ice cream parlors every time I had to walk through the dining room. But I didn't do anything ... not until about a month ago when I decided to replace the light fixture and pull off one little bit of wallpaper that was started to peel up at the seams. Finally! I had dreams of bright colors and clear light and something funky. I wanted something artistic. My sister had told me that the most interesting room in my house was my bathroom*. Somehow that just felt wrong. This was my big chance to make a huge change and express myself!!

This was my big chance...

Okay, so I ask you -- how can I feel perfectly comfortable choosing to mix cadmium red alongside cerulean blue, along with a shot of cobalt and yellow ochre and viridian to make wood planks, like on this unfinished bit of a painting, yet when it comes time to pick a color to paint the dining room, I spend THREE WEEKS before I finally settle on what could kindly be called beige. Huh?

Beige. The name of the color is actually Harmony (isn't that nice?) yet it looks a bit like burnt cream of mushroom soup. I wanted to be bold. I experimented with colors like pumpkin and red and peach and rich brown and funky grey... and after many trips to the paint store, after buying more little sample jars of paint and holding up chips of color, I chose beige. Excuse me, I meant to say Harmony.


*My bathroom, which is painted orange and has a green rug and turquoise towels, along with things like a photograph of an old statue taken by a friend, a painting of the beach by me, a painting of a flamingo by Diahn, several figure drawing pieces by Janey, funky candle holders, etc., probably IS the most interesting room in the house. 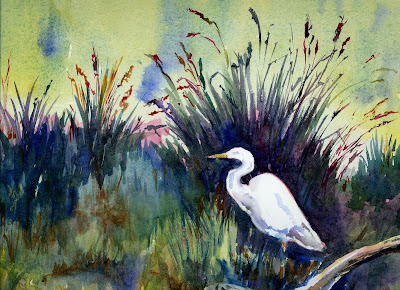 Tennessee to Georgia to Alabama to Mississippi to Louisiana to Texas ... then back again, and all the while there is a heat wave happening. Sigh. As if Texas in late July is not hot enough, they had the hottest days of the year so far while we were there. Well, we're finally back to our own roost, where it's a relatively cool ninety something degrees. (Relatively.)

Really, is it just the summer temperature that has me so artistically uninspired? Still, I suppose I should show up here a bit more often than I have lately. I'm a bit embarrassed ... or maybe that warm flush is just the heat ...