My sister and I both have birthdays within a week of each other in April, so we tend to celebrate together. This year, our parents came in and our other sister came down with her two girls for a family get together.

At one point, during all the very noisy bustle, it was announced that I had a birthday surprise, and had to cover my eyes for a few minutes while they brought it in.

Now, I've been campaigning hard for a new puppy, but want to wait until after summer vacations are over. When they were all talking about how heavy my present was and did they need a dolly to get it in, etc, and then there were lots of shhhh-s-ing noises, I was pretty convinced that, OH NO, they had gotten the dog early.

So when I turned and looked, I looked for a dog crate. None. A big heavy box. None. They all stood there in their "ta-da!!" poses and ... nothing. Then a voice said... 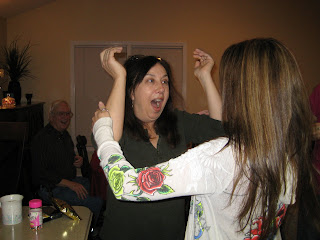 My daughter had come up from Florida for a birthday surprise. 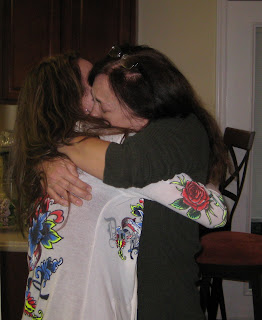 It was a great weekend, even if it was over with too soon, with everybody going home on Sunday.

Best EVER. (Good enough that I'm willing to show the totally unflattering photos!)
:-)

I don't see anything, whatsoever, unflattering about these pictures...all I see is total, uninhibited, pure surprise, bliss and joy! Beautiful. What more could you ask for on your birthday? Happiest of birthdays and many, many more to come! :)

Photos of family special times are aesome and yours are extra special because they share such pure love and joy. Those are such special qualities they are treasures.

Linda, may you enjoy many more surprises and happy meoments you will tresure forever.

Linda
Yea! Happy Birthday and what a wonderful surprise. Love this post and the pictures. You look Marvelous!
Sincerely you do.

I. LOVE. THAT. FACE! What a fantastic surprise! What a fabulous daughter! Wow - what more could you ask for, indeed?

Now...if she had been holding your new puppy...

Well, Belated Birthday Girl, you've given me tears in my eyes at 5:30 on a Saturday morning--clearly, THAT young woman has never had to worry for one nanosecond whether her mother loves her ;D. Amazing, unforgettable photos.
No need to say I hope you had a happy day!

That was so exciting and so heart happy I was smiling from ear to ear! You couldn't ask for a better birthday.

And, you might know it...my birthday is in April also!! No wonder us bulls get along so well.

Happy Birthday!!!!!I just wanted to thank you for your comment on my blog. I have ordered other tube w&n paints and arches 300 paper. Thanks for the advice and encouragement.